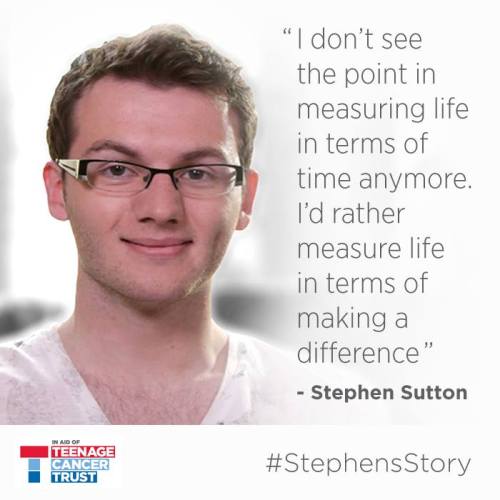 Unless you live under a rock, you will have heard the devastating news that the hugely inspiring Stephen Sutton passed away in his sleep yesterday. I still can’t believe the cruelty of a world where someone as pure and good as Stephen could be taken so harshly from his family, friends and from the rest of the world, but remain happy for him that he had achieved so much and could go having made such a difference to the world around him. Although incredibly impressive, I actually believe the fundraising £3.6million for the Teenage Cancer Trust is the lesser part of what he did for our society. Of course that money will save lives and will go towards creating a legacy in his name, but isn’t it so much more important that through the power of social media he managed to inspired a nation?

So many people were touched by his story, a quick scroll down Facebook or Twitter will see countless messages saying how amazing he was and what a loss it is to society. Importantly, not just those in full health were touched and inspired by him, Stephen also became an icon, a shining example, for those who are suffering from cancer, whether terminal or those in treatment. He showed them that cancer is not the end and that there is so much they can do from a hospital bed with the power of positive thinking. Having known a lot of cancer sufferers in my time, both those who have died and those who have survived, I can tell you that positive thinking really can make all the difference to those going through this. I write countless stories about those with cancer who refuse to let it get them down, who throw themselves into fundraising and who often beat the disease. Not saying these are related, but it certainly gives the patient a new focus and drive rather than just worrying about being ill.

After the No Make-Up Selfie craze flooded Facebook, Twitter and Instagram feeds just weeks ago thanks to a teenage mum from Stoke, we have seen yet another incredible use of social media thanks to Stephen Sutton. The teenager used Facebook and Twitter to spread word of his bucket list and to eventually raise £3.6million, which has been referred to as a credit to humanity. I can’t help but agree. In a world where Facebook and Twitter seem to be mainly used as ways of showing off, putting people down, or worse, trolling others, it is refreshing to see social media used to do good and unite a nation. The whole point of social media was to bring people closer together but with all the news reports on disgusting uses of the sites cropping up in recent years, it seems that more often than not they are being used negatively. Finally, we are seeing a new craze of using social media to help others and to make a difference.

The amazing thing about social media is that it is so easy, whereas before if you wanted to help charities you had to organise events, donate money or volunteer, now you are contributing just by sharing photos and messages. By sharing links to fundraising pages, you are already raising awareness and spreading the word. Online donation pages also make it so much easier to help, to donate to individual causes, challenges and to the larger charities. I’m just fascinated by how the No Make-Up Selfie spread like wildfire and the message of Stephen’s death is yet another incredible example – the Facebook announcement was shared more than 120,000 times within an hour of its publication.

Perhaps now more than ever it is important to take a good long look at the way we use social media and to make a concerted effort to be more responsible and to use it in the right way. I’d love to see a world where those using it to be nasty, to be perverted or to put others in danger just didn’t exist, but sadly I think where there is the technology there will always be these individuals. What I can hope for, is that the majority of people will continue to, or will start, using social media to really make a difference by raising huge amounts for charity by spreading these campaigns after being inspired by the work of Stephen Sutton. A far better use of our time than paying any attention to the Neknomination craze!