Tag Archives: we are festival

Watching the world through a screen

My first festival of 2014 gave me a good opportunity to ease myself in to a summer of raving in the sunshine. A non-camping festival, We Are FSTVL gave a perfect chance to have a couple of days in the sun (and a bit of rain) dancing with good friends to amazing music. While I was there I was lucky enough to see the likes of Annie Mac, Knife Party and Fatboy Slim giving massive sets on the main stages. It was incredible to finally see three of the top acts I have been dying to see live on a main stage in just one festival and with a huge line-up We Are FSTVL was a surprisingly intimate affair. Despite this, I noticed a continuing theme across the stages and tents, which made me slightly sad. Forget those who are hepped up on pills and the rest, forget those who are too drunk to stand up, forget those who decide to light up flares in the middle of a crowd. At least these guys are living in the moment and are really making the most of the experience. These ones aren’t the ones who bother me.

The ones who really upset me are the ones who are living it through a screen. I might be overreacting slightly, but it actually really offends me to see a crowd full of people who are watching a once-in-a-lifetime set as a DJ they have been wanting to see all their lives closes the main stage, but that they would prefer to watch it through their camera lens. After seeing Fatboy Slim play XOYO in London on the opening night of his Eat Sleep Rave Repeat tour, my mind was blown. I had never expected I would actually get a chance to see him live in my lifetime, let alone playing brand new material. But from then on, the dream grew and I was just desperate to see his set transform from the basement of a tiny, dark club to the main stage at a festival and how lucky I was to find he would be headlining the first festival of my summer! I, and all my friends, were beyond excited to see him play live and we made sure we got up on one of the platforms facing the main stage nice and early so we could get a good spot for Annie Mac as well. We had a perfect view of the whole crowd, the main stage and the sky above it which was filled with fireworks, flames and confetti throughout.

So imagine my dismay at seeing the people around us pulling out their camera phones and holding them up for the entire set. Not just up on the platform, but even down in the crowd, there was a sea of phones raised to the sky. What is the point? Can anyone tell me? In the days of Woodstock and early Glasto – when some would argue festivals were at their finest – no-one had camera phones or insisted on Instagramming every moment. Instead they lived every second, they dances to the music, felt it in their bones and spent the time meeting people, making friends and singing along. THIS is what festivals are all about. I know the convenience of camera phones means people want to capture every moment, and I have no problem with that as I too love to take photos of my friends smiling and happy, to keep those memories for long after the hangover had faded.

My problem is that people are choosing to do this rather than live the festival and the music. They would rather watch the whole explosive and incredible set through the phone screen and be sure that it is perfectly framed and looks like you are having an amazing time rather than actually experiencing it themselves. These are the people who don’t end up dancing at the festival, the ones who arrive home looking as perfect as when they set out and care more about the way the festival looks than feels. To me, the most important thing has always been they way I felt in that moment. When you see an incredible headliner take over the main stage after waiting months to see them live, when the stage explodes with confetti and flames, when you are singing along so hard you lose your voice, when you’re dancing so hard you nearly knock out the person next to you, and when you and a complete stranger throw your arms round each other and bellow out the words because you’re both just so excited. THAT is what festivals are about, losing yourself in the moment. They are about getting home and trying to tell people about it, but knowing that words just cannot do that moment justice. That no matter how you try to describe it, that those who weren’t there just won’t understand. 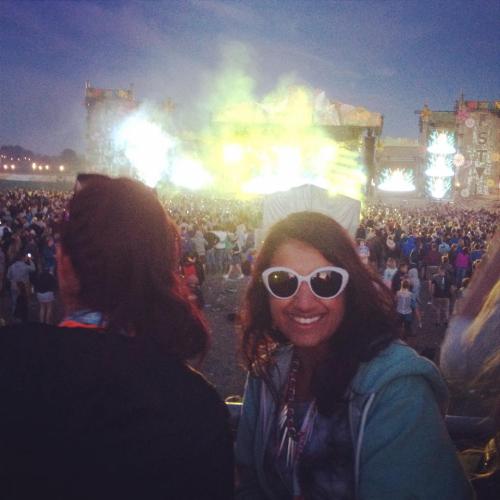 My concern is that our technology is so convenient that so many are missing out on this experience. They don’t know the beauty of having a single picture that transports you back to that moment and how you felt, rather than an hour-long video of the set with terrible sound and a jiggly camera focus. Who really wants to sit there watching it back later on? Do you really think your friends will be jealous when they see you spent that hours-long set videoing it rather than enjoying it? I certainly wouldn’t be jealous of that, I would just consider it a wasted ticket. I have lots more festivals in the pipeline for this summer and I just hope I will be seeing a lot less of this and a lot more people living in the moment. Ironically, one of my favourite festivals from last summer was BoomTown fair which was all about the experience and I barely have any pictures from it because I was so caught up in the moment and thoroughly enjoyed myself. (See my preview for BoomTown here.)

What kind of festival-goer are you – guilty of living behind a lens or totally in the moment and forgetting you have a camera?