It takes a lot for a TV series to grab me and make me actually want to commit to finishing it. I won’t tell you how long it took me to get to series three of Lost before giving up, but it was a hell of a long time. My problem is I’m terrible with committing to watching them weekly and I get bored waiting for the next instalment. Netflix has been a godsend for letting me watch a load of episodes in one go and because I always have so much work to do in the week, it means I can have a huge catch-up on weekends. Finally, my impatience won’t mean I miss out on all the excitement, and I might actually have a clue what people are talking about!

The last series that really hooked me was Luther – to start with, mainly because Idris Elba is gorgeous and I love the characters, but it was the gripping story lines that kept me watching all of the series. The character development over the series is brilliantly written and I absolutely love Ruth Wilson’s portrayal of Dr Alice Morgan. She is everything the dream female character should be – she’s scarily clever and completely outwits any male character who comes her way. She’s strangely beautiful and yet incredibly unique, she doesn’t conform to the normal ideas of beauty. She is in complete control and doesn’t require a man to live her life, perhaps this is why she is one of the most dangerous criminals Luther comes across, because she is the one that can’t be stopped. I just love her because she is such a different female character to all of the others in the show and it is so refreshing to see such a strong woman on TV starring alongside such a strong male. The pair have a great relationship and their chemistry is just fascinating. I love seeing Ruth Wilson in something that couldn’t be any more different than her role in Jane Eyre. 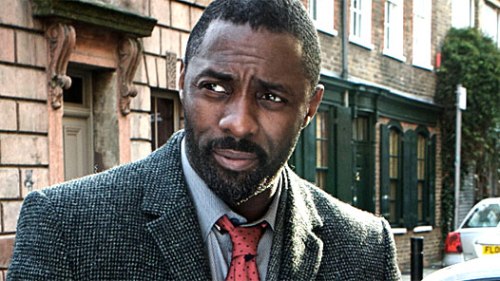 So, after running out of episodes to watch, it became very important to find something new to fill the void left by this fantastic programme. I was certain no crime series would do it so soon after watching Luther, so we went on the search for something different. After much deliberation, we decided to give Homeland a go and I’m so glad we did. After watching one episode I was hooked and desperate to watch another, we ended up ploughing through most of the first series over one weekend. I was surprised I liked Homeland so much because I had seen all the hype and adverts on TV for it and had always thought it wouldn’t be my sort of thing, that it would be too political for me. I absolutely loved it – such a  strong cast and a great plot that had me on tenterhooks throughout each episode as the story developed further and thrust even more characters into suspicion. It was brilliant to see Claire Danes in something so different to things I have seen her in previously because she plays this role so well. I love the tensions between her and the character of Saul and the underlying story of her taking the anti-psychotic medication is one that I can’t wait to see develop.

What other TV series would you recommend? Anything other than the standard Game of Thrones and Breaking Bad would be great!

Don’t tell me it’s over!

I absolutely love this programme – Him & Her. It is a fantastic comedy based around a couple and the flat they live in, their lives, relationship and friends. It is absolutely hilarious and really helps to show what real couple are like, or at least a lot of what my relationship is like.

It was so refreshing when I came across this series, after the finish of Gavin and Stacey I was looking for something that would fill the gap left in my life. It is rare that I get attached to a TV series because I am so often missing episodes and forced to catch up because of working late or other commitments. But this one instantly sucked me in, the simplicity of the comedy, the peering into real life and fly-on-the-wall type of comedy is brilliant and the characters are so realistic and endearing – they really are someone that you know in real life. This is something that I think if so important for me to really find comedy actually funny – if I can’t imagine bumping into these people on the street or link them with someone I already know, it is too far away from reality to find funny – that is where I fell out with the Mighty Boosh.

I absolutely adore Sarah Solemani and Russell Tovey in everything they do, but I also love the character of Dan in the programme. He is brilliant to watch, especially when he thinks no-one is watching him. I particularly love the moments when he is alone in the room and starts picking things up or trying to eat things. One of my favourite episodes has to be the one where Shelley finally stood up to Laura – just to see the look on Laura’s face was priceless!

I’m so looking forward to the final series – but so upset that it has to end. Now I guess I better start looking out for a replacement series! Any suggestions? Which TV series’ have had you hooked from the beginning, and why?

‘Him & Her’ final series: The stars talk weddings, sex and being cool

Him & Her: ‘It’s rare to find a sitcom where the couple get on’ – video interview

My television debut – and Nick Knowles said my name right!

I made my television debut on Monday when the Real Rescues programme I was filmed for around a month ago was aired on BBC1.

I had actually forgotten the programme was due to be on television but thanks to a text from my boyfriend saying he had just spotted me on TV, I was able to catch it on iPlayer.

The first episode of 20 in the series, the programme follows Nick Knowles as he presents events from the day-to-day work of the emergency services.

My starring moment came when the producers spotted the short film I had made of the rescue of a muntjac deer (affectionately known as Millie in the office) which had become trapped in the Inner Purfleet next to my office. The Lynn News staff reported it to the RSPCA and fire services and watched on as the combined forces to rescue the animal and release it safely without injury.

I was asked to appear in the programme as the person who filmed the footage used and was told that they thought my footage was excellent for being filmed on a mobile phone. I was interviewed outside the offices where the rescue had taken place and was told by the cameraman that I was excellent on camera – a natural – and that I should consider a career in television which I was quite excited by.

It’s not something I had thought about in detail before now but is definitely something I would consider in future when my training is complete. It was quite exciting being interviewed for television and I am really pleased with how well I came across and how good my voice sounded (my voice is a personal peeve of mine when recorded – I hate how high-pitched I can sound!).

To watch my appearance, click here, or on the picture above and fast forward to 29 minutes into the programme.

Posted on October 1, 2013 in Uncategorized

Crime, sex and violence – The beauty of this New Zealand drama

I used to love television, I used to scour the TV guides and pick out my entire week of programmes each Sunday. Then I became a teenager and ended up being too busy to dedicate my time. As a university student, I discovered the power of BBC iPlayer and 4OD, but that soon fell down the wayside when I started working full time and having so much else on my plate. These days, it takes a lot to get me to commit to a series – I often prefer to wait until it is finished on TV and is released on DVD so I can peruse at my leisure and dip in and out of the series.
This is the first series I have committed to in such a way for the best part of a year and I thought it deserved a blog post all of its own for that reason.

Top of the Lake, is an acclaimed 2013 television mini-series written by Jane Campion and Gerard Lee, and directed by Campion and Australian, Garth Davis. Filmed and set in New Zealand, the drama series follows a detective (Mad Men’s Elisabeth Moss) investigating the disappearance of a pregnant 12-year-old girl.
The DVD cover, featuring this image, was very striking and really caught my eye while browsing in HMV and when I saw it was a recent BBC production I decided I was going to have to purchase it and have a watch. Particularly with such a dark storyline, I was hooked.
I have yet to finish the series, but I have to say now that it is pretty damn good. Utterly gripping as it is explores the relationships between characters, the detective’s own personal problems – both emotional and within her family – all alongside the investigation of the disappearance of the young girl.
There are several scenes that become highly controversial and disturbing including one when a male character strips naked and begins to whip himself with a belt over his mother’s grave. If you prefer the softer, more comedic television series – I would avoid this. It is thought-provoking, powerful filming against a stunning background of New Zealand scenery.
The actors tackle the material unafraid of backlash for these sensitive topics and challenge the audience as they rail against the norm and introduce a range of characters – many mentally disturbed or emotionally distraught and clearly struggling to cope with day-to-day life.
The series exposes a culture within the country of exploitation of women, and of men, of emotionally stunted people who are trapped in a remote area but are still trying to run away from their problems.
The whole programme hooks on the idea of a delicate a beautiful new life coming out of such evil and the scene where the young girl gives birth is particularly horrifying because the audience is aware of the danger involved and the fact that she may not survive the experience.
Later the scene where the girl shouts at the baby to shut up just highlights her youth and inexperience, her inability to cope with the horrendous brutality that has been forced upon her before she was even able to understand how she became pregnant.
A powerful series, and one I am looking forward to continuing – I am intrigued to see where else the series can take the audience.
Has anyone else watched the programme? I would recommend it for those with a taste for dark and disturbing crime thrillers.

Posted on September 16, 2013 in Uncategorized