Just a little something to make you smile this Sunday… 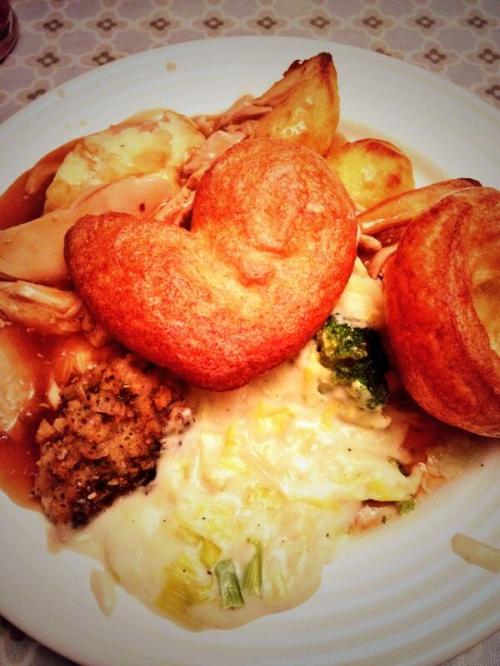 Just in case anyone out there has had a rubbish weekend, is already feeling those Monday blues, or just needs a bit of cheering up. I took this picture of my roast dinner this evening – because it just wanted to say it loves every one of my readers!

Thanks for all your support over the past few months and here’s to another year of reaching my blogging milestones!

On Sunday, I went back to my stunner of a beach hut, up at Old Hunstanton, to finish some of the painting. After working on the doors last weekend (see post), and much of the larger sections outside the hut, it was time to work on some of the smaller and more fiddly inside sections.

One of these sections was the sign for the beach hut, which we named ‘Dolphins’. Originally stencilled, we were unsure of how to repaint it without still having the original stencils – my parents suggested painting over the design and starting from scratch. However, I really liked the old sign and just felt it needed freshening up – so I decided to attempt to repaint in keeping with the original stencils, but freehand.

This was the result, and I am pretty proud of it! I unfortunately do not have a picture of the original so I cannot let you compare – but I would say that the outlines are actually more precise now that they were in the first place. The sign has now taken pride of place back up on the front of the hut. We also painted several other smaller items such as coffee, tea and sugar wooden pots, the mug tree, the mirror frame and curtain rail among other bits. And the deck had had a coat of black paint, as have the steps. I also used the black varnish to draw a letterbox on the door with the word ‘post’ written on it – just for extra cuteness factor! I don’t have any pics of this but will try to remember next time.