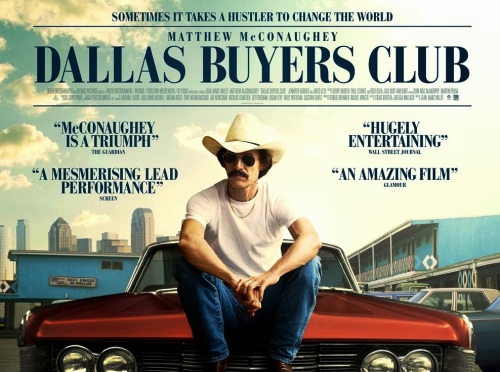 One of the many reasons I love going on holiday is flying – I love aeroplanes and the feeling of powering through the air, I find the whole experience so exciting despite having travelled all my life. A big part of this is the in-flight movies and on my trip to New York, I was in for a treat as I finally had the opportunity to see two films I have wanted to watch for ages! I dived straight in, with my organised little tray of food in front of me and a glass of wine in my hand, I settled down to watch the powerful and incredible film – Dallas Buyers Club.

Now I’m not usually a huge fan of Matthew McConaughey films because I will always remember rubbish films like How To Lose A Guy in 10 Days or Magic Mike and think of him as a bit of a joke when it comes to acting. Well this film has completely transformed my view of him – his commitment to the role and was obvious after he put his own body through so much to achieve the finished product and that is something I really admire. I also felt his portrayal of a straight man coming to terms with the reality of an illness and condition that was at this time still predominantly thought of as a ‘gay disease’ by the wider community was just astonishing. This tortured soul sucked us into the story and became so likeable despite his failings and as he forges a friendship with Jared Leto’s character and starts to see the importance of helping to supply AIDS victims with medication as more important than earning money, we really become quite attached to both characters.

Jared Leto is one of those actors I have always loved – he takes his work so seriously and that is obvious from his scary weight-loss for the role, McConaughey too lost a lot of weight for the role and when those pictures of the pair emerged and the story of the film was first revealed – I knew instantly that I really wanted to watch this film. The story itself was fascinating – just the fact that this man managed to prolong his life for over seven years after being given just 30 days to live is simply amazing when he was using untested or unapproved medication. The final moments on screen where the future of each character and the medicines were explained almost had me in tears to see quite how long Ron Woodroof survived and the difference he made to people’s lives. Getting caught up in the story, it is easy to forget that this really happened, until these final moments bring it all home to you.

I also found it very interesting to see the mentions of the bribery and favouritism shown  by the Food and Drug Administration – the fact that they had been giving preferential treatment to certain products or treatments because of money is not surprising. But the fact that they might have actively been denying medicines that could have helped save the lives of AIDS sufferers seems beyond heartless – but I guess this is just the way the world works. It was just another very interesting dimension to the film, particularly when you saw the American hospital compared to the Mexican pop-up that Ron visited for the medication.

All in all, a great film that will see you fall in love with the characters and left heartbroken by their demise. It tackles an important subject and an important history by telling a story that I was completely unaware of. Despite treatments having advanced over the years, AIDS and HIV still seem to be such a taboo and aren’t often discussed so this film has done a great deal to bring the disease into the spotlight and highlight the intense differences between both treatment and the attitudes surrounding it in the years between the real story and the film. I would seriously recommend you see this film, whether it sounds like your cup of tea or not – it is an important watch and an example of truly great acting. Well deserving of the awards and accolades.

Have you seen Dallas Buyers Club? What did you think?